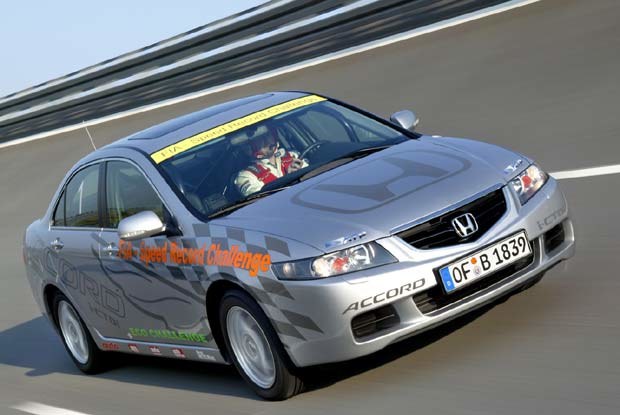 Amongst the speed records set, which were all achieved in Production Car Class B (2000 - 2500 cc), were 133.04 mph (1 mile flying start), 84.25 mph (1 mile standing start) and an average speed of 130.38 mph over a 24-hour endurance period. These records were all set at Papenburg high-speed oval test track in north-west Germany on 1 and 2 May, and are all subject to FIA ratification.

Two production cars, randomly selected by FIA officials, were used to undertake the speed records, and apart from the fitting of roll-cages, racing harnesses and radio equipment for track-to-pits communication, no other modifications were made to the cars.

Following the speed record attempts, the same two cars were then driven 419 miles from Papenburg test track to Wiesbaden, near Frankfurt in order to complete the fuel economy run. The route comprised of a mixture of motorway and non-motorway driving, during which one of the Accords achieved a staggering 92 mpg average.

The project, whose aim was to demonstrate the performance and economy of the Accord i-CTDi, was a joint production between Honda, the FIA and Italian-based JAS Motorsport, who managed fuelling and pit-stops.

Honda UK's driver in the speed record attempt, Robin Liddell, who has previously raced at Le Mans 24-hours, as well as the American Le Mans Series and the BRDC British GT championship, commented: "The car's performance is very impressive, demonstrated by the records weve achieved. Honda has made real steps forward in styling, ergonomics and interior design with the new Accord Diesel and now has a package that can take on the best cars in its class."