Opel is celebrating July 27, 2003 as a day that will be recorded as a very special one in the company?s history. At 12.44 CET yesterday test runs aimed at setting new records at Opel´s Dudenhofen Test Center with the new ECO-Speedster were successfully concluded. 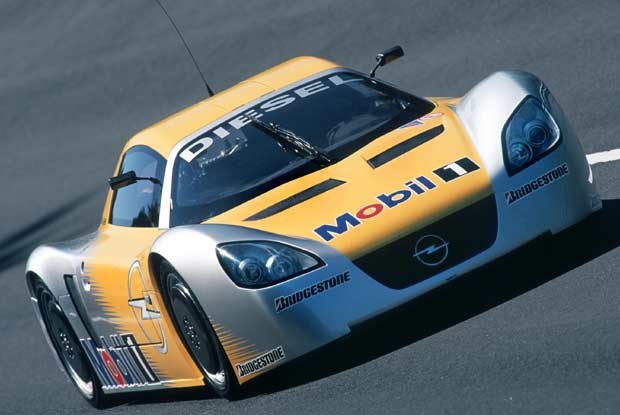 After 24 hours at full speed the 82 kW (112 hp) prototype set a total of 17 new international records for special automobiles with turbocharged diesel engines in the 1100 to 1499 cm3 displacement class. Fifty-five minutes before the chequered flag, 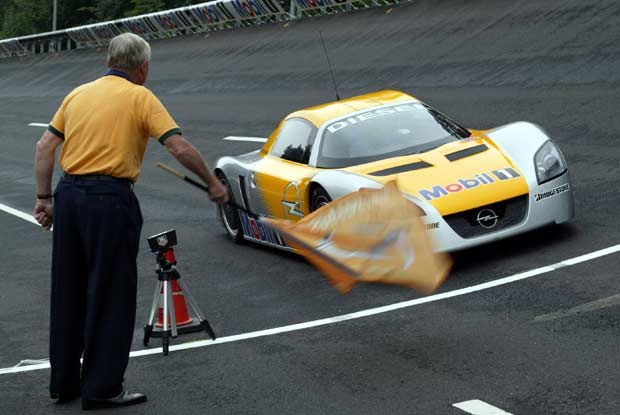 /INTERIA.PL
with 16 records already in the bag, the ECO-Speedster was forced into the pits by an electrical problem and refused to restart. As allowed under the regulations, which forbid any outside assistance, the driver then pushed the car to the finish and finally crossed the line using the starter motor.

The power and efficiency of the new 1.3 CDTI engine, which will make its debut in the Opel Corsa and Agila in the coming weeks, were dramatically demonstrated by the round-the-clock average speed. At 225.079 km/h, the previous record was broken by a margin of 98.295 km/h, despite the unplanned pit-stop. Shortly before the finish, the average speed was even higher at more than 240 km/h, the ECO-Speedster even covered the first 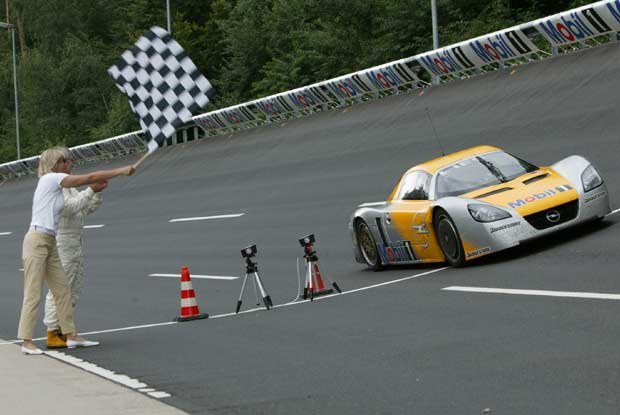 An identical ECO-Speedster model tested on public roads by a group of international trade press journalists proved to be exceptionally economical. At 2.54 liters per 100 km, a noteworthy best performance was achieved. ?With these two results we have succeeded in demonstrating our ability to build a prototype according to the ?250 km/h x 2.5 liter consumption? formula, ,? Opel Executive Director for Engineering, Hans H. Demant said. Management board member Alain Uyttenhoven added, ?Once again our colleagues at the International Technical Development Center, with creativity and expertise, have transformed our motto ?Opel. Fresh thinking for better cars,? into reality.?

The 17 records by the ECO-Speedster complement those achieved by another prototype that made headlines 31 years ago. On June 1, 1972 a modified Opel GT with a 95 hp 2.1 liter turbo diesel engine also set numerous world records at the same proving grounds in Dudenhofen while achieving a top speed of 197.5 km/h. Martin Holzhofer, Project Leader at the International Technical Development Center, summed it up this way: ?The ECO-Speedster demonstrates the advances made during the last three decades and the astonishing career of the diesel engine in passenger cars. It also shows just how much untapped potential can still be found in automobiles, using available technology which is nearly ready for series production.?

A high performance version of the new Opel 1.3-liter common rail diesel engine served as the powertrain for the ECO-Speedster. The four-valve engine, which makes its production debut in the coming weeks in the new versions of the Corsa and Agila, is one of the best diesels when it comes to fuel consumption, emissions and refinement. The production version of the new CDTI ECOTEC engine delivers 51 kW (70 hp) and develops maximum torque of 170 Nm. The two models using this engine are lively yet at the same time environmentally compatible. The Corsa 1.3 CDTI sprints from zero to 100 km/h in

?The ECO-Speedster exemplifies our diesel offensive. By the end of 2003 we will have introduced a total of four new common rail diesel engines with a broad performance range of 70 up to 177 hp, low weight and fuel economy,? Opel Chairman and Managing Director, Carl-Peter Forster, said.