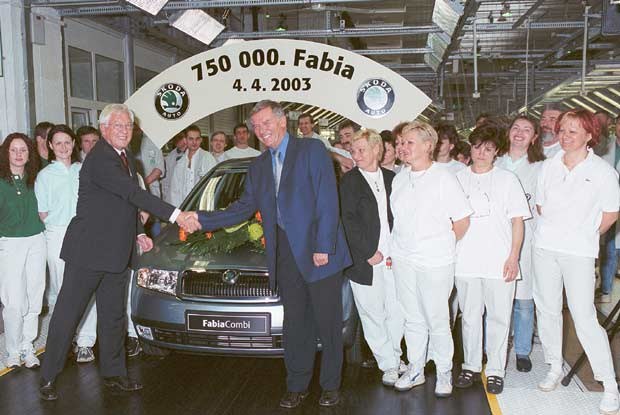 /INTERIA.PL
Vratislav Kulhánek, Chairman of ŠkodaAuto, made a presentation on the assembly line, saying, "The Škoda Fabia has become the unchallenged best-selling car in the Czech Republic. It is also very succesful in Central Europe and in the demanding markets of Western Europe. Last year, a total of 264,641 Fabias were sold, 52,958 of them in the Czech Republic."

The Škoda Fabia has been named the Car of the Year in the Czech Republic, Great Britain, Denmark, Croatia, Slovakia, Lithuania and Ukraine. The Škoda Fabia also won the What car? "Supermini of the Year" for 2000,2001 and 2002 and an accolade as the safest car in class from Which? magazine in Great Britain. In addition, the Fabia won the prestigious "Golden Wheel" award in Germany in November 1999.

In 2003, the Fabia has already benefited from two new engines, the 1.2 litre 54bhp 8 valve and the 1.2 litre 64bhp 12 valve. However, the best is yet to come, as the eagerly anticipated Škoda Fabia vRS is due to hit UK shores in the autumn of 2003. Powered by a diesel Pűmpe Dűse engine producing 130bhp, the Fabia vRS should bring a smile to the faces of all hot hatch fans.