Having changed the landscape of off-road vehicle development on its arrival seven years ago, the Mercedes-Benz M-Class has stepped up another gear. The Stuttgart-based brand sowed the seeds of a new segment with the introduction of the original M-Class in 1997. 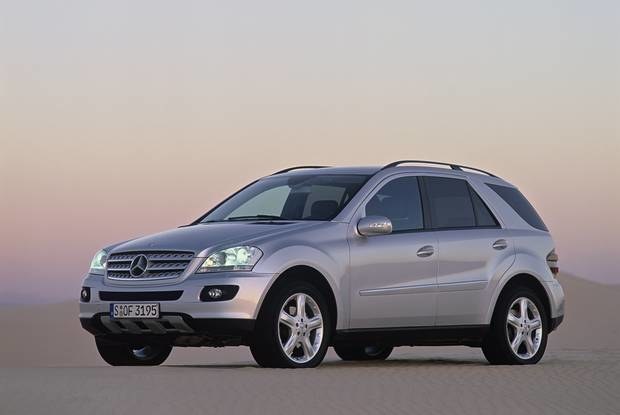 /INTERIA.PL
Now, state-of-the-art technology ? such as three new and powerful engines, the standard-fitted seven-speed automatic transmission 7G-TRONIC, the anticipatory occupant protection system PRE-SAFE?, AIRMATIC air suspension, the now even more effective four-wheel drive system 4-ETS ? is set to reaffirm the Off-Roader?s leading position in a fast-growing market. After its premiere at the 2005 Detroit Auto Show, the new M-Class will be introduced onto the US market in the spring of next year and in Europe next summer.

You need look no further than the design of the new M-Class, with its beguiling blend of heavily contoured surfaces and taut lines, to admire the majestic character of the second-generation Off-Roader. The swept-back windscreen, striking front wings and rising shoulderline

of the new car set the unashamedly sporting tone, a theme developed by the proportions of the body. The new M-Class is 150 mm longer, 71 mm wider and 9 mm lower on the road than its predecessor and its wheelbase has grown by 95 mm to 2915 mm.

Three of the four engines available for the 2005 model are hot off the press and outstrip the output and torque of the power units for the outgoing model to the tune of up to 38 per cent. Cutting-edge drive-system technology and impressive aerodynamics (the Cd value is down to 0.34 from 0.39 previously) combine to cut fuel consumption by as much as 10 per cent.

The V6 diesel engine with third-generation common-rail direct injection, which takes the place of the outgoing five-cylinder in-line unit in the range, is celebrating its series-production premiere. Put to work under the bonnet of the new ML 320 CDI, the new power unit delivers 224 hp and places a maximum of 510 Nm of torque on tap from 1600 rpm. Also on hand to offer the twin benefits of six-cylinder comfort and dynamism is the new ML 280 CDI, serving up 190 hp and a peak torque of 440 Nm. This diesel model manages 30 mpg (NEDC combined), making the new M-Class one of the most economical off-roaders in its class. Another new arrival is the V6 petrol unit powering the ML 350 ? your ticket to 272 hp and maximum torque of 350 Nm. The engine range is headed by the proven eight-cylinder unit at the heart of the ML 500, which now delivers 306 hp.

The globally unique seven-speed automatic transmission 7G-TRONIC is fitted as standard in all variants of the new M-Class. Intelligent shift management allows the transmission to make optimum use of the engine?s enviable reserves of power, whilst at the same time ensuring that the M-Class is an even less frequent visitor to the fuel pumps than ever before. 7G-TRONIC can now be operated electronically using a selector level positioned close to the steering wheel, technology which Mercedes-Benz has christened DIRECT SELECT. Additional steering-wheel gearshift buttons, meanwhile, enable the driver to glide manually through the seven gears with the minimum of fuss.

Ready for the rough: the off-road package with differential locks and AIRMATIC

Mercedes-Benz has taken the permanent four-wheel drive and 4ETS traction systems to the next level by incorporating additional functions such as a downhill driving aid, Start-off Assist and the off-road ABS system. The M-Class can be ordered with two different variants of the four-wheel drive system, allowing it to meet the varying requirements of off-road drivers: a new off-road package is available as an optional extra, allowing the M-Class to master even the toughest routes across rough terrain. Among its primary features are a two-speed transfer case with an off-road ratio, manually or automatically selectable differential locks (100 per cent) between the front and rear axle and on the rear axle, and a modified version of the AIRMATIC air suspension system tailored to off-road driving, which raises ground clearance by 110 mm to as much as 291 mm and the vehicle?s fording depth to a maximum of 600 mm.

The air suspension also significantly increases ride comfort, which is why Mercedes-Benz offers a road-tweaked version of this technology as an option (not as part of the off-road package). AIRMATIC teams up as standard with the Adaptive Damping System (ADS), which adjusts the responses of the shock absorbers to the situation in hand, to open the door to a new dimension in driving dynamics and ride comfort.

A new era in safety: PRE-SAFE? makes its debut in this vehicle class

The Mercedes-Benz M-Class also sets the pace for other off-roaders to follow in terms of safety. Its occupant protection system is underpinned by a self-supporting body structure with large deformation zones in the front and rear ends and a wealth of top-class state-of-the-art technology fitted as standard. This includes adaptive two-stage airbags for the driver and front passenger, front sidebags and windowbags, as well as belt tensioners and belt force limiters for all seats. In the event of a rear-end collision, the newly developed NECK-PRO crash-responsive head restraints provide additional protection for the driver and front passenger.

With the option of adding the anticipatory occupant protection system PRE-SAFE? to the mix, the new Mercedes Off-Roader raises the bar in its class. This multi-award-winning technology provides a reflex response to critical driving situations where an accident threatens to occur, preparing the car and occupants for a collision. PRE-SAFE? acts in advance to tighten the driver and front passenger seat belts, bring the fore-and-aft setting and the cushion and backrest angle of the electrically adjustable front passenger seat (optional) into a more favourable position and close the sunroof (optional) if the vehicle is about to overturn.

It is by forming an unparalleled synergy of active and passive safety that PRE-SAFE? can prepare car and occupants for a possible impact. The system is based on a link-up with the anti-lock braking system (ABS), Brake Assist and the Electronic Stability Program (ESPO ), whose sensors identify dangerous driving manoeuvres. PRE-SAFE? uses the data from these sensors to optimise occupant protection before a collision.

The new M-Class also boasts exceptional long-term quality ? another Mercedes trademark. Part of the standard specification for the Off-Roader is a new type of paint finish developed on the back of nano-technology, which made its series-production debut in Mercedes-Benz vehicles. Offering significantly improved scratch resistance compared to conventional non-metallic or metallic paint finishes, nano-particle clearcoat provides a noticeably enhanced shine. Like all Mercedes passenger cars, the M-Class also comes with the 30-year MobiloLife mobility and value-retention warranty.

Up there with the best: greater comfort and more space

The interior of the new M-Class also exhibits typical Mercedes quality, thanks to higher-quality materials, more pleasant touch and feel characteristics and significantly improved spaciousness for all the vehicle?s passengers. For example, at 880 mm, the distance between the front and rear seats is 15 mm greater than that in the outgoing model, achieving a level more familiar in a luxury-class saloon. Knee-room for the rear passengers has been increased by 35 mm and elbow width by 32 mm.

M-Class customers can select the seats for their new Off-Roader to suit their personal comfort requirements. In addition to the standard-fitted multi-adjustable front seats, sports seats with special backrest contours can also be specified.

Up to 2050 litres of load capacity offers ample space for luggage and sports equipment.

The cushions and backrests of the rear seats are split 63:37 and can be folded down. Removable cushions can be ordered as an option, creating a level loading surface stretching 2.10 metres in length through the rear of the car. Maximum load capacity stands at 2050 litres, exceeding that offered by its predecessor model by 30 litres (VDA measuring method).

The proven EASY PACK system makes the boot area of the M-Class easier to load and unload. Among other features, it can be supplied as an option with an electrically operated tailgate and a package designed to secure items safely in place in the load area.

State-of-the-art assistance systems more familiar from luxury-class Mercedes models help to relieve the stress on the driver, raise comfort and further improve safety. The M-Class is available as an option with the newly developed multi-zone THERMOTRONIC automatic climate control system, the PARKTRONIC parking aid and the control and display system COMAND APS with Europe-wide DVD navigation. Bi-xenon headlamps with the Active Light System and the cornering light function (optional) enhance driving safety during the hours of darkness.

A success story beginning in 1997: blazing a trail for modern SUVs

With its unique design concept, the Mercedes-Benz M-Class led the way for a new generation of off-roaders on its premiere in 1997, and a whole series of international prizes and awards has since underlined its exceptional design, off-road performance, functionality, driving pleasure and safety.

A total of over 620,000 drivers around the world have so far opted for the original "Sport Utility Vehicle" (SUV), making it one of the most successful models in its class. And the arrival of the second-generation M-Class in spring 2005 is set to open a new chapter in this automotive success story.